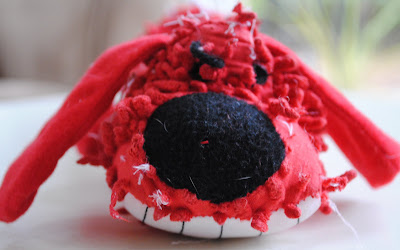 when chewing Bobo
the squeek can be signal
of impending doom

yes, you have homework and other blogging adventures

I've had a couple of people ask me how I do my headers, etc. I will prep a little DIY header tutorial for y'all once Blogger gets it sh*t together.

Until then, just pretend reading Splendid Minta is your homework assignment - except you actually enjoy it.
by Liz at 8:01 PM No comments: Links to this post

Email ThisBlogThis!Share to TwitterShare to FacebookShare to Pinterest
Labels: blog

I am officially over winter but, no where close to being ready for summer. Let's just stay spring all year long, ok? OK!

I got my big packet of seeds from Henry Fields really quick - and now I cannot wait to get those babies started... but I can't just yet.

A couple of key pieces of info are important for deciding when to set out plants. First, I need to know approximately when I want to set out my plants... aka, when can I actually dig the holes in the garden to plant the plants. A quick look at the 2011 Farmer's Almanac predicts the last frost for my area around April 1st - so I have to plant after that. 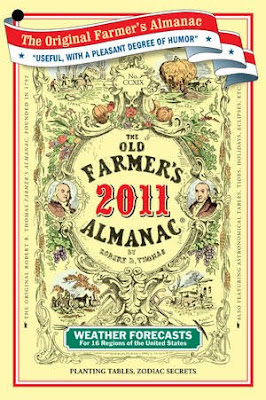 I know from planting a garden for the past couple of years that planting around Easter seems to work best for me - its still cool enough that my lettuce doesn't wilt in the summer heat but also warm enough that the tomatoes start going and I'll have some great fruit by early summer. Easter is April 24 this year so somewhere in between April 1 and April 24 will be best. A good hard and fast rule for planting is that you want the ground temperature to stay consistently over 50 degrees - even overnight.

Most of the seeds I ordered suggest starting them indoors 6 to 8 weeks before planting. Starting them indoors where its warmer and they still get sun or artificially get light through grow lights (yes, think Weeds season 4) is ideal. Working backwards from April 16th, my targeted plant date, I determined that I would start seedlings on February 19th.

So between now and Feb. 19th I really need to get on prepping the new homes that the seedlings will be growing in until they are ready to go live in the garden. I've used seed pods and seedling trays before but, this year, since I am cheap and also plan on growing A LOT of seedlings to give away and really have a prolific garden - again because I am cheap - I needed this to be a DIY project. There are several great options out there including recyling toilet paper or paper towel rolls cut in half but I am going with the newspaper option. 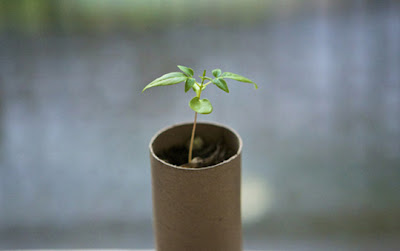 WHY you ask? While the toilet paper roll option would be much quicker and less work, I just don't think there is anyway I can save up oh about 100 tubes in the next month. We just don't go that much. sorry. 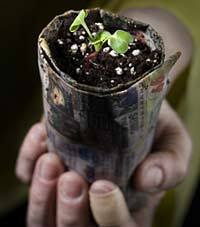 The DIY seed pots made of newspaper seem to be really easy - basically you take a strip of newspaper (black ink only) and make a little "cup" - using a flour and water paste to seal the deal. This seed pot can be planted right in your garden or easily peeled off when planting.

Eric and I are going to have a little seedling pot making party soon - we need to churn out about 100 of these babies over the next month. I'll be sure to let you know if I plan on ever doing this project again afterward. Has anyone else done this?


*photos from Farmers Almanac, Re-Nest and Chicago Tribune - links in text
by Liz at 8:16 PM No comments: Links to this post

My header is being wonky... I had a really cute new one to put up but we'll just have to wait til Blogger fixes it. Any other Blogger users having the same "Blurry Header" issue? It seems to be pretty rampant in the discussion board.
by Liz at 10:03 AM 1 comment: Links to this post

I love that part. 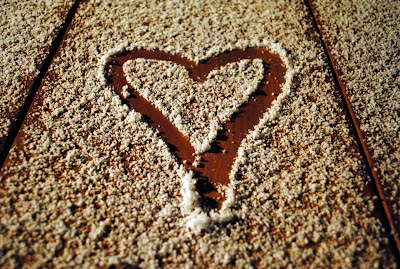 Do you ever have those days/weeks/months when you and your significant other totally click, have long conversations about nothing for hours on end, you forget what time it is, just want to be as close to them as possible, when your heart totally aches with love?

I love that part.

*photo by moi, taken just as it started spitting snow a couple of weeks ago
by Liz at 11:05 PM 1 comment: Links to this post

Seriously, I've been stalking it for about a year now but just snatched up this $10 for $20 at Bath & Body Works. SOLD. I mean I am going to shop there anyway right?

Go get the groupon!
by Liz at 6:48 AM No comments: Links to this post

word of the day: blerg.

I can't believe it

It really did snow. For the 2nd time this winter. For the 3rd time in 2 years in South Carolina. Hello Global Warming. (and Hi Al Gore!) 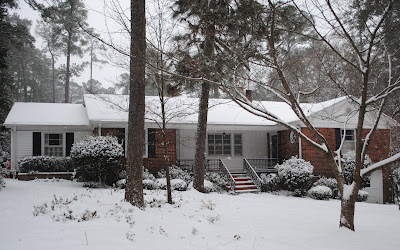 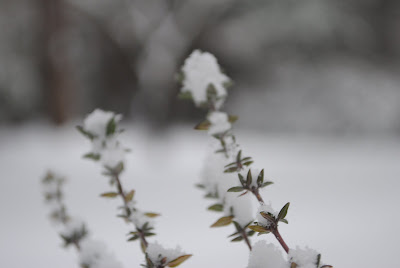 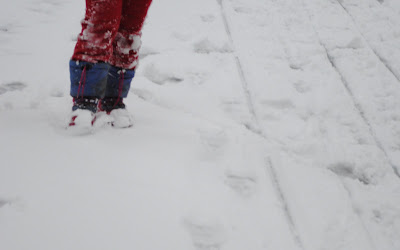 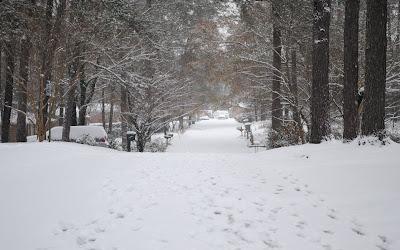 *photos by moi
by Liz at 9:15 AM No comments: Links to this post

so apparently, even though we haven't had any precipitation here in the drrrrry south, we are bracing for snowpocalypse 11. poop. 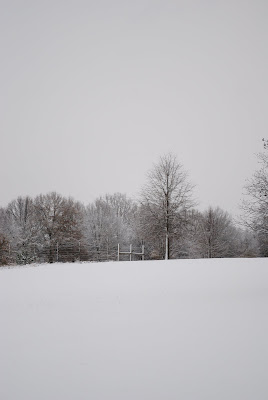 all local school districts are canceled for Monday, the city and county offices, outpatient Drs. offices, the university - where I was supposed to start my first day of classes tomorrow also canceled. poop.

excuse me while I pout tonight. i have been waiting for tomorrow for so long, I just want to go to school. poop.

*photo taken the day after Christmas by moi.
by Liz at 10:54 PM No comments: Links to this post 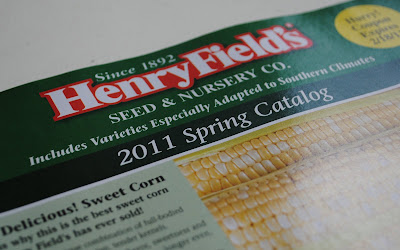 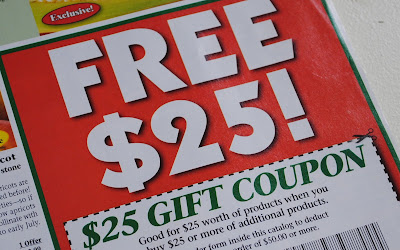 My annual Henry Fields catalog came in the mail a week or so ago and that great coupon for $50 worth of seeds for $25 just could not be passed up. 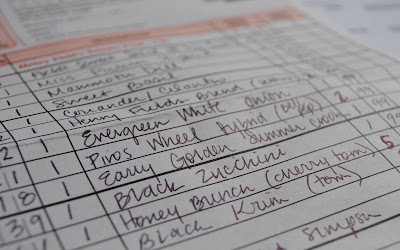 trying to fill your cart with $50 worth of seeds is kind of hard.

I managed though. You should never worry about a girl having a hard time filling her shopping cart.

Here are some of my favorites: 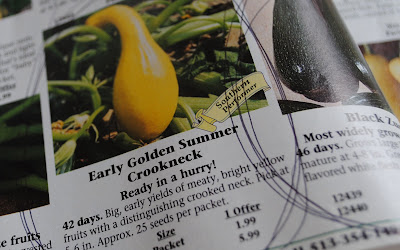 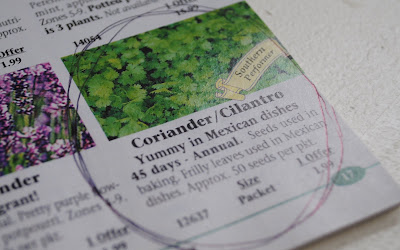 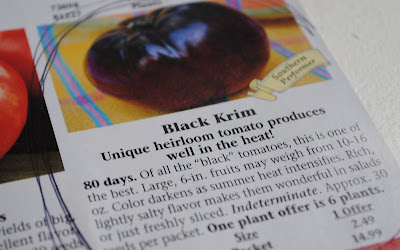 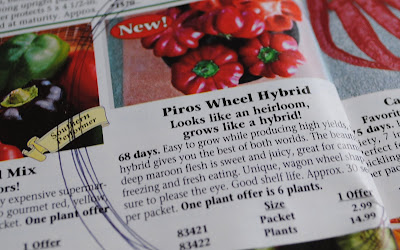 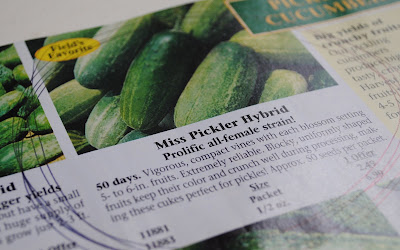 Buying $50 worth of seeds means I will have something like 2500 seeds to actually germinate, thin and plant. This may have been a mistake.

*please do not quote me on this but I think a coupon code is on every catalog or order on the website. The offer is good through February 18, 2011.
by Liz at 12:41 PM 2 comments: Links to this post

this handsome guy gave me a kiss this morning before he left for work. 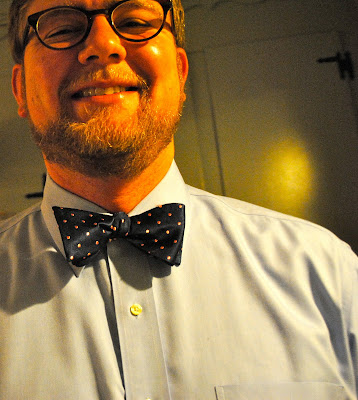 oh the bowtie, and the starched shirt and that smile
by Liz at 12:29 PM 1 comment: Links to this post

Email ThisBlogThis!Share to TwitterShare to FacebookShare to Pinterest
Labels: Eric

It's that time again.

Time to revel in 2010's accomplishments and I think it's safe to say, our house has come a long way baby. 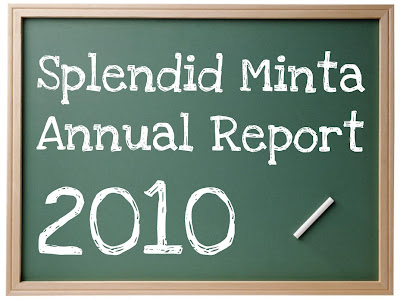 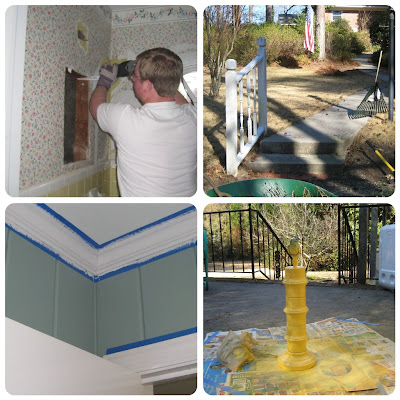 a) installed a medicine cabinet in the master bath; b) the front yard got a haircut; c) painted the paneling and trim in the den; d) up-cycled 5 thrift store lamps 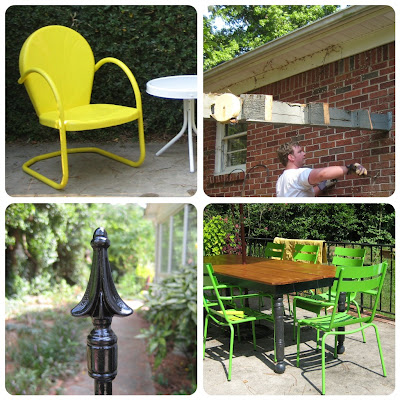 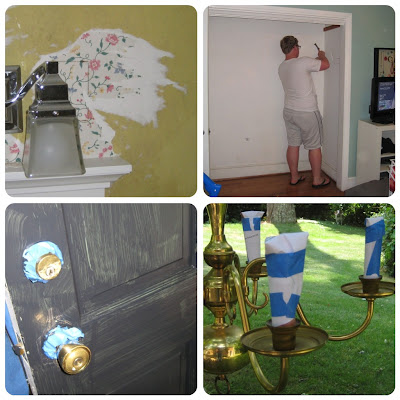 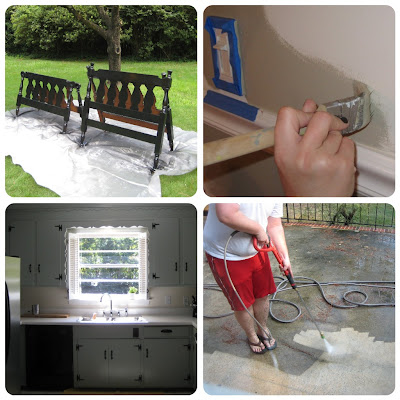 a) painted our found (in the attic!!) twin bed frames; b) painted the hallway a moody smokey grey; c) gave our kitchen a major face-lift with paint; d) pressure washed all our sidewalks, siding and patios - MAJOR GROSS! 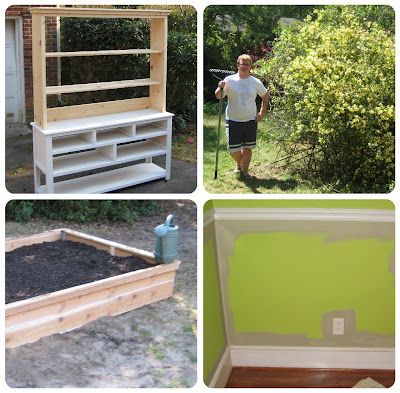 a) built our own hutch/sideboard; b) chopped down the monster Lady Banks Rose bush; c) built a raised bed garden and had a bumper crop last summer; d) painted the dining room 3 times, yes, 3 times - this shows color #2 and color #3 is the cut in color - much better.

We did a lot. In total we probably spent about $600 on all the projects above - most of the cost being for lumber and paint. Lots and lots of paint. I cannot even begin to tell you the amount of man hours spent. I am overwhelmed thinking about it all.

Looking forward to 2011 - the house projects will be scaled back a bit while I am in school but I do want to accomplish the following:
- painting the moulding in the ENTIRE HOUSE, all the same color of course
- giving the pink bathroom a free (or mostly free facelift)
- possibly moving the laundry facilities from the kitchen to the soon-to-be mudroom/laundry/craft room.
- stripping and re-caulking & painting the windows on the outside of the house.
by Liz at 9:49 PM 2 comments: Links to this post

The Dewey Decimal system of links

Let's get real here, I spend a fair amount of time "Rogging". What is Rogging you say? It's Liz-speak for blog reading. Is there an actual word out there for this act? I visit crafty sites, home improvement ones, a few fashion and cooking blogs too. Most days I find a few projects/recipes/ideas that I want to file away for later use and these typically get dragged to a bookmark titled CRAFTY LINKS on my firefox browser window.
NO MORE... In an effort to be more efficient, use the blog for more purposes other than pretty pictures and little notes on life, I've created the Splendid Minta Link Library. Here you can find some of my favorite craft projects I have yet to try, yummy recipes, some cool DIY projects and just general links I don't want to lose. 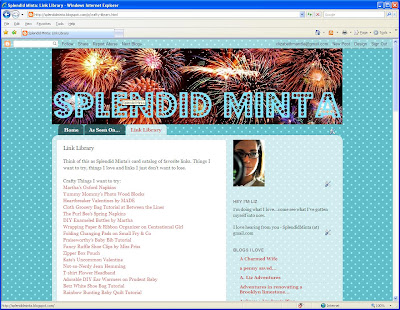 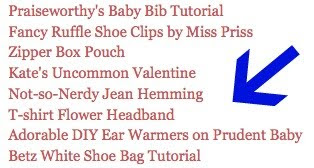 Go see if there is anything you like too...
by Liz at 9:23 AM No comments: Links to this post 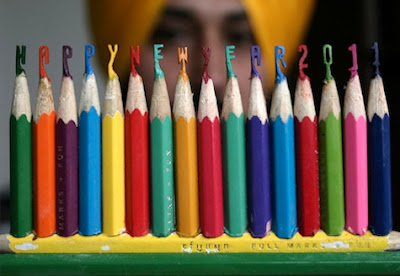 pic of the day from The Telegraph by artist Harwinder Singh Gill.
by Liz at 9:32 AM No comments: Links to this post 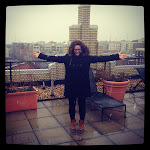 I'm doing what I love...come see what I've gotten myself into now.

I love hearing from you - SplendidMinta (at) gmail.com

I gather images that inspire me from all over the place and I am really bad about remembering where they are from. If I have used your photos and you want credit or would rather I not, please email me. DIY projects I do are my own creation, and I don't receive any compensation for the products or materials I use. Feel free to link back to Splendid Minta, no need to ask permission- I just ask that you keep it friendly and if you want shoot me an email of where its linked! Thank you!